Neighbour Lab is changing the way we plan for disasters

Does thinking about the worst bring out the best in people? UBC students and their colleagues developed an innovative approach to creating more cohesive and resilient communities by expanding on existing disaster-planning and emergency-preparedness practices.

Neighbour Lab was created by UBC Geography students Adele Therias and Leah Karlberg alongside Emily Carr students Steph Koenig (BDes) and Emi Webb (BDes). It encourages local communities to participate in the design process of a shared community structure, called a Neighbour Hub, which can be used on a daily basis or in the event of a disaster.

Neighbour Hubs are designed as public art but with interactive features that help to increase a neighbourhood’s resilience. This requires identifying the current and potential challenges facing the local area, whether that’s the threat of catastrophes such as earthquakes or more chronic problems like social isolation, and building capacity for dealing with those challenges. The hubs can help achieve this by incorporating features such as kinetic or solar energy production, rainwater collection, and communications infrastructure such as bulletin boards and a built-in radio. What makes Neighbour Lab’s resilience building efforts unique though is that they eschew a typical top-down approach and instead use a collaborative process that involves the local community at every step of the way.

Adele Therias, UBC Geography Major and Neighbour Lab co-creator explains: “What’s different about what we’re doing is that the design process is a tool to bring people together. We’re not engineers, we’re not inventing new technology, but we are innovating in terms of the processes we use to build community."

“We developed the initial idea for a design competition in October, 2018 as a way to support the City of Vancouver Disaster Support Hubs, which are identified as meeting places in the event of a disaster. While having a location is helpful we wanted to think about how to better raise awareness and support emergency preparedness across the city. What we found through our research was that people were most excited when they were talking about something tangible, so a new physical structure in their environment, and also when they had a say in how the structure looks and functions.”

Another defining characteristic of Neighbour Lab’s approach is that they want to incorporate fun and playfulness into their resilience building efforts. While those aren’t words most people might associate with emergency-preparedness, the team see this approach as more conducive to public engagement than typically authoritative or scary messaging around disasters. By designing hubs as public art residents can enjoy and appreciate them on a surface level, and hopefully this piques their curiosity to learn more about the hub’s interactive features that will prove useful in a disaster situation.

We’re not engineers, we’re not inventing new technology, but we are innovating in terms of the processes we use to build community.

Their first Neighbour Hub was installed in March, 2019, in the Fairfield neighborhood of Victoria which was designed for Shift Collaborative’s local Building Resilient Neighbourhoods initiative and co-created with the Leonard St. block watch. Designed collaboratively over the course of four months, the resilient bench provides neighbours with power outlets and a community bulletin board. The installation was celebrated with a neighbourhood block party, indicative of the fun, social and community-based approach the Neighbour Lab team want to incorporate in resilience building. 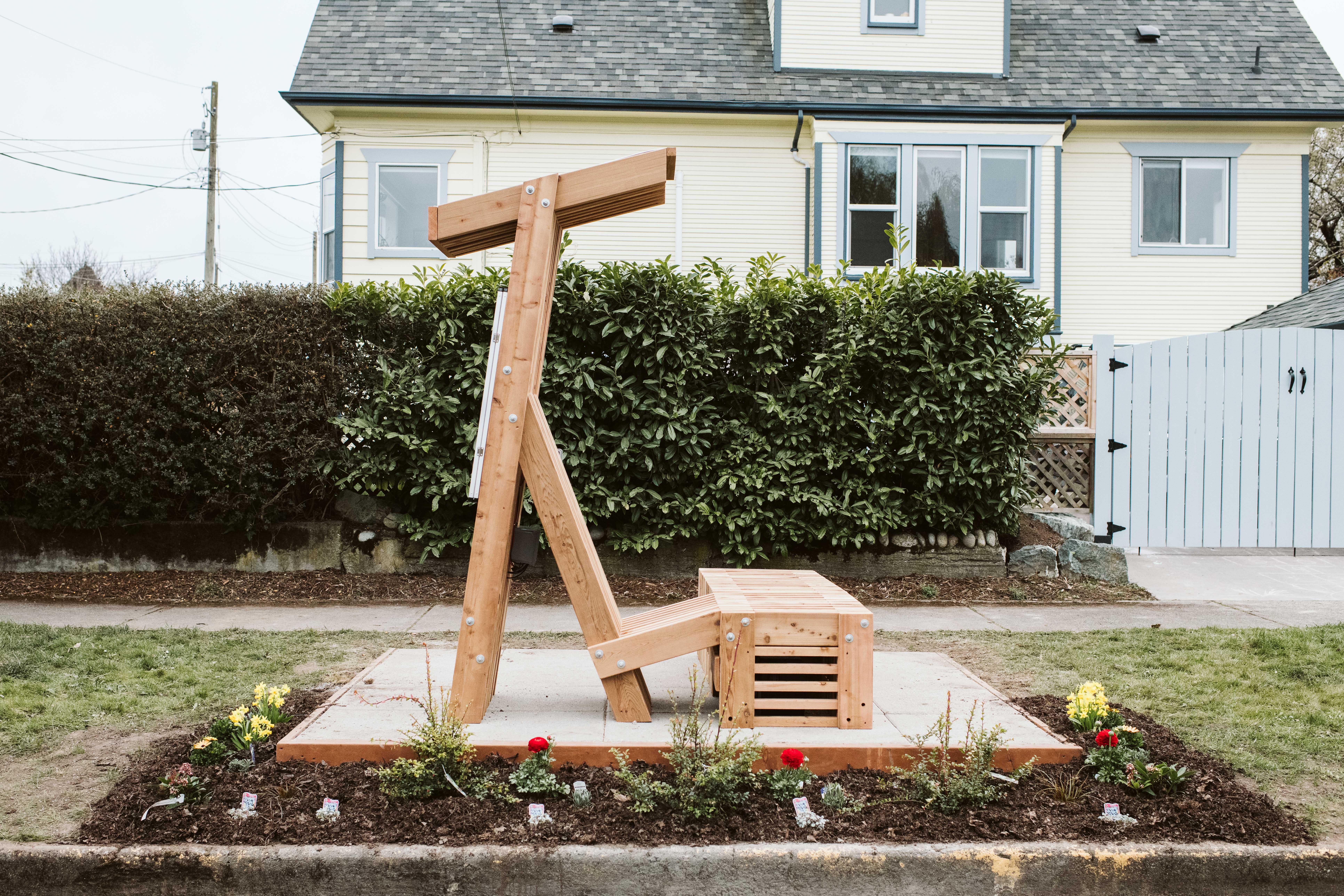 “What we’ve realized is our original design is just one of many possible hubs, so the concept has become a structure that is adaptable to and meets the needs of residents, no matter where they are. While a lot of the needs will be similar for post-disaster situations, we’re also thinking about how we might support climate change resilience or forest fire resilience which could look quite different.

“The idea of resilience isn’t just about disasters though, it’s about other long term challenges such as loneliness which, as we know, is a significant problem in a lot of big cities. So the whole Neighbour Hub design process that encourages creating those community connections is really valuable in so many ways.”

Neighbour Lab is currently working on their next installation in collaboration with The Thingery, a “lending library of things” situated on the Arbutus Greenway in Vancouver. The installation, supported by VIVA Vancouver and Greenest City, will encourage users of the Greenway to make use of a welcoming seating area and community bulletin board, as well as a hand crank that can be used to create kinetic energy to charge cellphones or other handheld devices.

To deliver the installation Neighbour Lab and The Thingery have partnered with eatArt foundation, a Vancouver-based charitable organization that uses art to highlight the social and environmental impacts of energy use and technology, Sustaingineering, a student engineering team that designs, develops and deploys sustainable technology solutions for renewable energy applications and the UBC Chapter of Engineers for a Sustainable World.

Along with the Thingery founder Chris Diplock, Neighbour Lab hope that the collaboration will help activate an existing community resource, providing day-to-day benefits that could also be used in emergency scenarios. In the near future, Neighbour Lab and the Thingery plan to host engagement workshops to begin to facilitate a dialogue around emergency preparedness in Kitsilano. 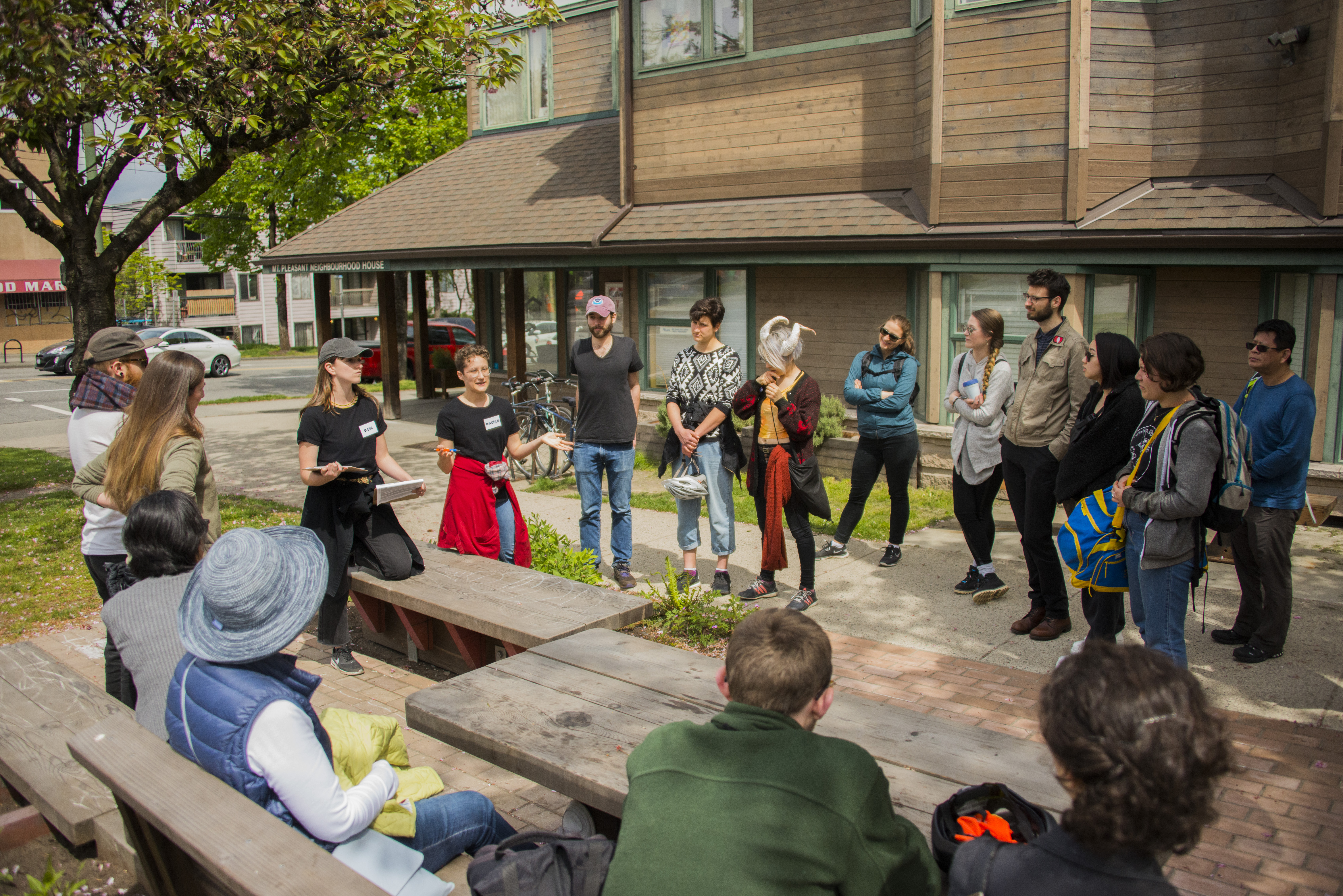 Neighbour Lab have also recently delivered a series of emergency-preparedness workshops for different neighbourhoods in Vancouver, working alongside the City of Vancouver. Using their distinctly playful approach, the workshops were a series of guided walks that used storytelling to encourage residents to reimagine their surroundings if an earthquake had struck Vancouver. With the city facing a one in three chance of experiencing a serious earthquake in the next 50 years, these types of workshops play a vital role in preparing residents but in a social and engaging way.

With all four founders recently graduated, Neighbour Lab are looking to the future. The team are currently taking part in entrepreneurship@UBC’s Social Venture Incubator Program, which supports ventures of UBC students, faculty, researchers or alumni that have social or environmental impact as their primary goal. Through the program, Neighbour Lab will take part in a workshop series and receive mentorship and access to networks and a supportive peer community to help ensure their innovations have lasting impact. They are also following up with the many people across BC that got in touch after the installation of the Neighbour Hub bench in Fairfield who are interested in designing their own hub.

Having graduated this month from UBC’s Faculty of Arts, Adele has big plans for the time ahead.

Adele Therias: “The next year is going to be about finding those communities who want to fundraise with us, finding partners who make each hub more affordable, working out how local businesses could get involved and perhaps match funds."

“We’re also going to look to start working with the private development sector, as Neighbour Hubs have the potential to help them fulfil certain requirements such as environmental and public art commitments."

“Ultimately I think our ideal situation would be to see Neighbour Hubs recognized as a best practice, and become a part of core municipal funding. As soon as we’re part of these institutional systems, Neighbour Hubs and all the benefits they bring become much more accessible to residents.”

Check out the original article from Innovation UBC, here

What It Takes To Get Started With Us [Part 2]

What It Takes To Get Started With Us [Part 1]